Would a Rose Be As Sweet if We called it Asparagus?

In the 1980s if one were widowed or divorced, s/he usually thought about remarriage somewhere in the future. Then suddenly in the 1990s women (and some men as well) decided that remarriage was not for them. They discovered that living alone wasn't all bad. It was nice to have a 'friend' with whom to date occasionally, but as one woman said: 'I don't want to take care of another old man!' Women were no longer thought to be old maids or losers if they were not attached to a man, if they did not have a 'Mrs' before their name. Most were no longer totally dependent on a man. They no longer wanted to be a 'wife'.

It's possible that men thought as well that they would like to be free to pursue new choices, maybe even younger women. While many didn't dislike their old style of life, they were now free to try a new version of themselves. They could think of themselves as 'very fine fellows' with no one telling them what to do.

Today we should carefully think about what we want. Not long ago a friend, a widow, called and asked what she should do about a current relationship. She enjoyed dating this new man who happened to be a friend of an associate, but she didn't want it to develop into an intimate relationship. She assumed but really had no idea how he viewed their dating. She had the vague feeling that perhaps he wanted more. Fortunately she had treated her new friend to dinner occasionally so that she was not in a totally dependent position. She had instilled some equality into the dating. 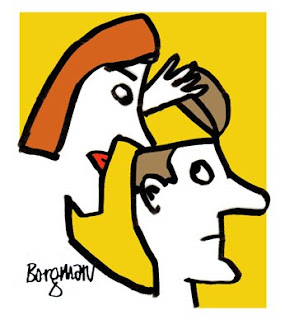 I suggested that she tell her gentleman friend that she enjoyed his company and dining out with him, but she simply wasn't ready for any kind of commitment and that she hoped that they could remain friends. She should be honest with him. As it turned out he wasn't interested in more either, so they were now free to be comfortable with each other. The guidelines had been drawn.

If you stop and think about what you want in your future life, you can more easily avoid awkward situations. "Know thyself" is wise advice. Perhaps "Be true to yourself" is even better.

But I wonder how much labels have to do with our decisions. What if we called the two people in a relationship 'partners". I suspect that many women don't want to be a 'wife' again because that word defines what that role will be. She will feel obligated to take care of her 'husband', to cook and clean. Nor will a man feel that he must play the role of a husband, taking on all the financial responsibilities that implies. Calling the two people partners conveys the idea that they can work together. It also can well describes a same sex relationship.

It's true that some people still cannot envision a marriage of partners. They want to have the roles defined in the more conventional manner in which we have all been raised. Isn't it time to knock down the barriers that stand in the way of a fulfilling relationship between equals. Both men and women have unique abilities to contribute to a new life. Let's not limit our roles but be free to join together and still be ourselves.

ABOUT MSG: If it were just MSG in our food that can cause all kinds of symptoms, it would be relatively easy even though MSG has many names not required to be included as an ingredient on labels. I am now finding that there are a myriad of additives that can jar our bodies such as 'gums' for thickening and preservatives put on some salad greens and even potatoes to keep them fresh that can cause stomach distress, insomnia, depression to name a few problems for 'sensitive' people. While name clinics still maintain that only a small minority will have problems, some health professionals estimate that over 40% of people are affected. If I toe the line and eliminate a lot of these additives from my diet, not only do I sleep better, even my eyesight is improving and my brain is clearer and more active. Many of the foods in markets that are additive free are imported from other countries such as bread sticks from Italy, water crackers from Canada, and lentils, eggplant and other vegetables in delicious sauces from India (Tasty Bites). What is our food industry doing to us?

How are you doing? I'll try to add a note about MSG, etc as I blog.

Until later than.
Posted by gloria bursey at 3:36 PM No comments:

gloria bursey
Hi, I'm Gloria Bursey and I have been researching and writing about love, romance, and relationships for many years as well as travel and interesting people. I was the publisher of two magazines. I also wrote about many subjects including politics. During college I lived in Washington D.C., and after marriage to the late Roger Slykhouse, I lived in Saudi Arabia. I am author of the book: 50 Ways to Find Romance after 50. My two blogs are The Romance Game and Finding Romance after 50. I am adding a third blog, Great Lakes Log, which is political in nature. I often feel that we in the middle of the country are forgotten by those in Washington. Incidentally I followed my own advice and met a wonderful man, Harry Borgman, on the internet after being a widow for over 23 years. Enjoy his cartoons on my blog.